The goal of my work is to combine existing solutions under common architecture and represent some unified and extensible design which can be a basis for another brand-new test automation solution or even common platform for delivering test automation types. This is the not the first time I am getting back to this but the more results I get the more different solutions I can integrate under the same framework. I don't expect it to be another widely used platform (I am not even talking about replacement of any vendor tool) but that can be a good prototype. I doubt there were a lot of people who believed in Selenium eight years ago when only some draft version appeared. But take a look at the situation on test automation market now. Selenium became one of the most popular test automation tools and the popularity is growing. Even QTP loses its positions and now it's quite easy to find test automation specialists who are familiar with some popular programming language like Java, C#, Ruby, Python, PHP and many others which were traditionally used for development.

Mostly I'm doing this for the purpose of investigation to find out how the test automation works from inside (actually that was one of the reasons why I created that blog) as well as describe the steps I'm going to perform during development.it is done just for interest, there is no commercial background of it.It should be just accumulation of my experience and my existing solutions which in the future can be grown to something bigger.

I decided to give the platform and name.it is Sirius. Why? No idea, I just like that. So in the future if I mention that name in my blog that would be definitely talk about the platform I am developing.

So, let's get started. Since it's something more that just another library I would give it not only the name but also it should have a logo. Here it is: 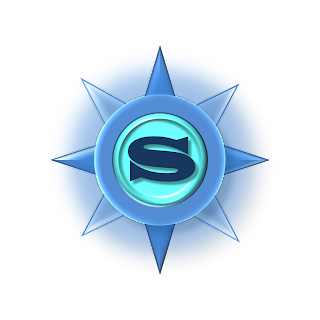 Sirius is the star of blue giant type. So, that's why I chose such colors. So, we've just started! It's time to go further.

At the moment there is huge variety of different test automation tools which simulate user interaction with various types of GUI.In addition to the big numbers of vendor tools there are a lot of open libraries with more restricted capabilities but at the same time they have part of the market which is growing.And there's a reason why. Most of vendor tools are usually heavy weight applications written long time ago and using outdated technologies.As the result, tests development experiences problems with inconvenient user interface, restricted library functionality and lack of materials in the network.that's especially true for the tools which use custom programming language. Of course, partially that was compensated with a record and playback capabilities but it's already known fact that record and playback is just a convenient way to to receive some prototype of the test. In order to make well formed test automation solution such feature is not enough. Even more, for large-scale projects it brings more damage than profit.

It has been a long time when it was stated that one of the good test automation practices he is treating test automation process as development. Naturally, test automation passes through the same stages starting from analysis and design to regular execution and maintenance. As the result, a lot of development practices can be involved in test automation as well. That's why more or less modern test automation solutions start using some more less popular programming language. Vendor tools have similar trend. For instance, Rational Functional Tester is Java-based from very beginning, Micro Focus SilkTest has dedicated extensions to develop tests using C# or Java, Test Complete initially had an ability to write tests using multiple different scripting languages with integration with different development environments like Visual Studio. But in the most cases it was just a partial solution because it's too hard to adopt existing heavyweight application to modern needs. At the same time the more and more new solutions appear which are actually some libraries rather than full-featured black box applications. They appear to be easy to use and easy to integrate into into entire test automation solution as they were just small libraries. Within the last five or ten years they became more or less complicated and widely used. Partially, that's because of zero price but anyway modern test automation tends to be more related to development rather than some separate activity. Also that's reflected in growing popularity of Agile methodology where the difference between development and testing activities is minimising and different people combined roles in the entire process.

All the above processes changed the shape of modern test automation and modern test automation solution is rather another software product than as set of scripting and configuration mess. At the same time a lot of solutions which interact with application GUI proved that there is no magic in simulating various clicks and mouse moves. At least it's not something surprising for web applications. Other application types are not yet ready for that but there are some solutions for them as well. But for now they are very fractional and it takes a while to join all those solution within single project. So, the next stage is for the test automation platforms which provide the interfaces for wide range of technologies to be tested. And some work is being done on it.

So, let's start work on something like that. We would see that there's no magic behind user actions simulation just a lot of hard work. But it's needed to be done.

Before starting doing anything we should identify what exactly do we want.So in this chapter we will enumerate all of these requirements to entire platform.

So all this leads to 2 ways of client server interaction.those interaction schemes can be represented with the following diagram: 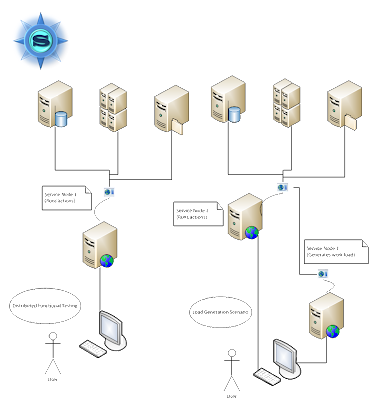 First interaction scheme is commonly used for functional tests where we operate with one server instance at the same time.second scheme is rather used for this performance tests where some of the service nodes are used for tasks generation.

All right, we've identified high-level representation of what we're going to have. Now it's time to implement all this stuff.

In the future posts I will describe every step I would go through during development. There would be some tricky cases I have to resolve and they would be interesting not only in the context of work I am doing but also can show you solutions for the problem you can encounter during your work. So, let's do this!

Posted by Mykola Kolisnyk at 19:24